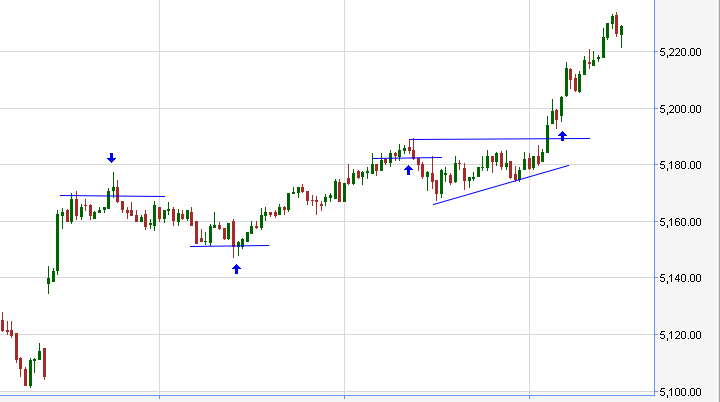 1.Market gap opens above yesterdays close.Previous day was a down day which closed at the lower extreme. Shorts were expecting the market to gap down. Any move up will force the shorts to cover.
2.First bar was a doji and the third wide range bar broke its high. But there was no follow up move. Second push to go up failed and it is a short signal. target is the open of the day to form a range.
3.Market did not go to the open . It gave a complex pull back and gave a long signal with a spring pattern. Could have booked a small profit on the counter trend short trade.
4.Book the profit on this long trade when it failed to break the HOD.Market drifts down and went sideways. Now it is very clear that the trend is up.Successive higher lows points to a breakout of the high. Safe entry long here.
Posted by SMART Trader at 10:29 PM 2 comments:

DP is Decision Point ,MC is a Master Candle,SAC for Spike and Channel,PP for Pressure Play
NS refers to Nifty Spot value,RN means Round Number and BW Barbed Wire
TRAP is Trend Acceleration Pattern and TTTouch Trades
Posted by SMART Trader at 11:00 PM No comments: 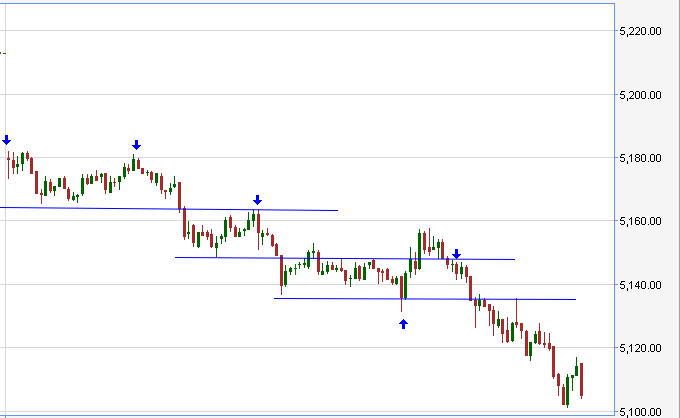 1.Market gaps down to LOPD, If LOPD holds market may try to close the gap. Fails to go above the first doji bar and drifts down.Forms a minor DB goes up and tests the HOD.

2.This can also be considered as a bear flag formation after a gap down.The second attempt to go up also fails. Here one can safely short with a very small risk.

3.Market breaks down and pull backs to test the breakout point. A two legged pull back gets rejected rapidly.A shorting area. But very difficult to enter as rejection was very fast.

4.Market breaks down and forms a bottom. Second attempt of the low gives a counter trend BOF trade.This move goes above the range resistance and fails. A scratch trade long.

5.A very good opportunity to short with the trend reversing the earlier long trade.

Note: Trades are on 3 minute charts. I trade the naked charts. I find even the grid lines as distraction .

Lesson: Trade with the trend. When the bias is down sell the highs. TST and BOF of range highs and retracement highs
Posted by SMART Trader at 8:59 PM No comments: